Ten years ago, Swedish researchers reported that bariatric surgery was associated with a dramatically reduced the incidence of cancer in women but not in men.

Now, a new American study shows this remains true for patients who undergo the bariatric surgery procedures most commonly performed in the United States today: gastric bypass and sleeve gastrectomy.

Researchers found a significantly reduced risk for obesity-related cancers, including colon cancer, among women who had bariatric surgery, but not men. The results are reported in the January 2019 edition of Annals of Surgery(269[1]:95-101).

The Swedish Obese Subjects (SOS) study, which was published in 2009, focused on patients who underwent the popular procedures of the time, vertical banded gastroplasty and nonadjustable or adjustable banding, which are rarely performed today. About 10% of the 2,010 surgical patients in the SOS study underwent gastric bypass (Lancet Oncol 2009;10[7]:653-662).The SOS study remains the most definitive evidence on bariatric surgery and cancer risk, but some clinicians have expressed concern that the current popular bariatric procedures—gastric bypass and sleeve gastrectomy—may produce different results. Some reports revealed these procedures may, respectively, increase risk for esophageal adenocarcinoma and colon cancer. A 2013 Swedish study, which was based on adults who underwent bariatric surgery between 1980 and 2009 and matched controls, concluded that “obesity surgery seems to be associated with an increased risk of colorectal cancer over time. These findings would prompt evaluation of colonoscopy surveillance for the increasingly large population who undergo obesity surgery” (Ann Surg 2013;258[6]:983-988).

The new U.S. study shows, however, that colon cancer—along with postmenopausal breast and endometrial cancers—declined substantially after bariatric surgery. This large multicenter cohort study included 13,545 patients who underwent gastric bypass, 6,047 who had a sleeve gastrectomy, and 1,236 who received a laparoscopic adjustable band. Another 1,350 patients underwent bariatric procedures that were not specified. 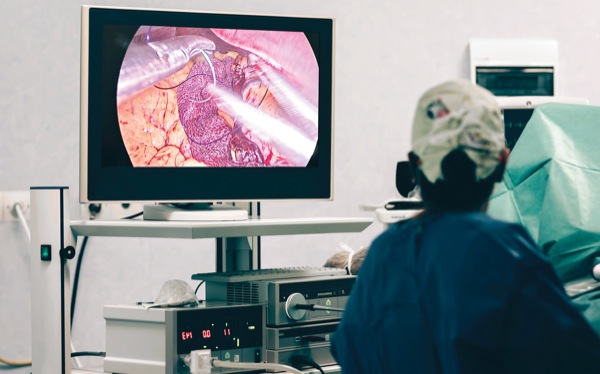 Compared with 66,427 matched patients with severe obesity who did not get surgery, bariatric surgery was associated with a reduced long-term risk for cancer. Surgical patients had lower rates of both esophageal adenocarcinoma and colon cancer, even though surgical patients were more likely to be smokers.

“In addition to the other health benefits associated with bariatric surgery, the reduction in the risk of cancer is an important reason to consider bariatric surgery for severely obese patients,” said Daniel P. Schauer, MD, MSc, an associate professor of medicine, University of Cincinnati, who led the study.

Obesity is strongly associated with an increased risk for several types of cancer, including postmenopausal breast, endometrial, liver, pancreatic and ovarian cancers, contributing to an estimated 6% of all cancers and 15% to 20% of all cancer deaths in the United States, according to the study.

The new study in Annals of Surgery is “huge for most of us in bariatric surgery. This specifically shows a lower risk of cancer, particularly postmenopausal breast, endometrial and colon cancer,” said L. Renee Hilton, MD, the chief of minimally invasive surgery and director of bariatric surgery at the Center for Obesity and Metabolism at the Medical College of Georgia at Augusta University.

“That’s important for … everyone who cares for patients. I spend a lot of time advocating to insurance companies or to the state, and I need to use evidence that shows that we have a superior treatment for these patients, which is weight loss surgery.”

The majority of Dr. Hilton’s patients are women, as is the case in most bariatric surgery practices in the United States. 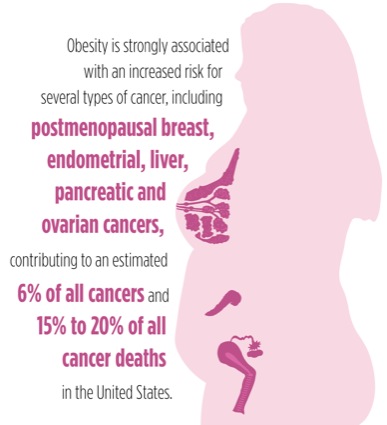 Investigators suggested two potential reasons why it is only women who experienced significantly reduced cancer risk after bariatric surgery: Over 80% of the surgical cases were women, and only women are at risk for developing postmenopausal breast and endometrial cancers. Both cancer types are highly sensitive to estrogen levels; obesity, in turn, contributes to estrogen excess. Even weight loss alone can markedly reduce levels of circulating estrogen.

For men, prostate and lung cancers are the most common types, but neither is associated with obesity.

Investigators said the variation in cancer reduction, even among obesity-related cancers, was not surprising, given the multiple mechanisms by which obesity increases cancer risk. This study did not address whether it is bariatric surgery or the resultant weight loss that lessened cancer risk. A previous study by the same group of researchers, published in Obesity in 2017, demonstrated that weight loss matters most when it comes to cancer risk (25[suppl 2]:S52-S57).

The latest findings come from a retrospective cohort study of patients who underwent bariatric surgery between 2005 and 2012 with follow-up through 2014. The data were collected from a large integrated health insurance and care delivery system with five study sites from Kaiser Permanente, including the regions of Colorado, Northern and Southern California, Oregon and Washington.

Patients were 18 to 79 years of age at the time of surgery, had no history of cancer or prior bariatric surgery, and had at least one year of enrollment in the health plan before surgery and six months after surgery. They had a documented body mass index (BMI) of at least 35 kg/m2 within one year before surgery.

Surgery cases and controls were comparable on most demographic and clinical characteristics, but there were important differences: Those who underwent surgery were more likely to have several cancer-related risk factors, including a slightly higher BMI, higher prevalence of smoking, slightly greater use of hormone replacement therapy and slightly higher baseline rates of non-alcoholic steatohepatitis. The use of screening mammograms was slightly higher in the control group.

Michel Gagner, MD, a professor of surgery at the Herbert Wertheim School of Medicine at Florida International University in Miami, and a senior consultant in surgery at the HÔpital du Sacre Coeur in Montreal, often speaks to his patients about the original SOS study findings. He tells them bariatric surgery decreases the overall incidence of cancer by 30%. The latest study won’t change how he speaks to patients about cancer and surgery but adds to the evidence supporting gastric bypass and sleeve gastrectomy, he said.

The cancer risk reduction in this study was evident less than four years after surgery, with an average follow-up of 47 months for bariatric patients and 41 months for controls, he said. “I would like to see longer cohorts, and perhaps we will see even more cancer reduction.”

Dr. Gagner said reducing cancer would be a “huge benefit for health in Canada and the United States. If we can reduce the incidence, this is a huge cost reduction, not only increasing life expectancy but the cost of taking care of these cancers.”

Cancers were considered associated with obesity if they were among the 14 types described by the International Agency for Research on Cancer working group. These include esophageal adenocarcinoma; postmenopausal breast cancer; cancers of the kidney, colon, rectum, gastric cardia, liver, gallbladder, pancreas, ovary, corpus uteri and thyroid; and multiple myeloma and meningioma.

Several other recent studies also have examined cancer risk after bariatric surgery, and not all show a benefit for colon cancer.

Authors of an English study, published in November 2018 in the British Journal of Surgery, concluded gastric bypass might increase the risk for colorectal cancer (105[12]:1650-1657). From a cohort of 716,960 patients diagnosed with obesity, investigators matched 8,794 patients who underwent bariatric surgery with 8,794 obese patients who did not have surgery. Gastric bypass, but not gastric banding or sleeve gastrectomy, was associated with an increased risk for colorectal cancer (odds ratio [OR], 2.63; 95% CI, 1.17-5.95).

“There is a need for further investigation to understand better the biological mechanism and interplay with the gut microbiome underpinning this observed increase in colorectal cancer following Roux-en-Y gastric bypass surgery. Whether colonoscopy surveillance may be considered after gastric bypass requires more research to establish the association and to evaluate the benefits against costs of any such surveillance,” the authors wrote.

A meta-analysis of population-based studies, published in Obesity Surgery in late December, reported a reduction in cancer incidence after bariatric surgery with the greatest protection for women. It reported no significant effect of bariatric surgery on the incidence of esophageal or colorectal cancer (2018. doi: 10.1007/s11695-018-3501-8).